What Is Die Casting

What Is Die Casting

Die casting is a manufacturing process for producing accurately dimension, sharply defined, smooth or textured-surface metal parts. It is accomplished by forcing molten metal under high pressure into reusable metal dies. The process is often described as the shortest distance between raw material and finished product. The term, “die casting,” is also used to describe the finished part.
The term “gravity die casting” refers to castings made in metal molds under a gravity head. It is known as permanent mold casting in the U.S.A. and Canada. What we call “die casting” here is known as “high pressure die casting” in Europe.

HOW ARE DIE CASTINGS PRODUCED? 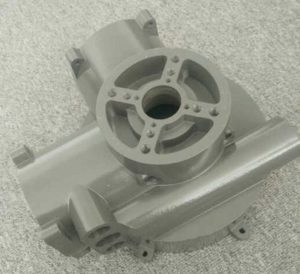 First, a steel mold capable of producing tens of thousands of castings in rapid succession must be made in at least two sections to permit removal of castings. These sections are mounted securely in a machine and are arranged so that one is stationary (fixed die half) while the other is moveable (injector die half). To begin the casting cycle, the two die halves are clamped tightly together by the die casting machine. Molten metal is injected into the die cavity where it solidifies quickly. The die halves are drawn apart and the casting is ejected. Die casting dies can be simple or complex, having moveable slides, cores, or other sections depending on the complexity of the casting.
The complete cycle of the die casting process is by far the fastest known for producing precise non-ferrous metal parts. This is in marked contrast to sand casting which requires a new sand mold for each casting. While the permanent mold process uses iron or steel molds instead of sand, it is considerably slower, and not as precise as die casting.

TYPES OF MACHINES FOR DIE CASTING

Regardless of the type of machine used, it is essential that die halves, cores and/or other moveable sections be securely locked in place during the casting cycle. Generally, the clamping force of the machine is governed by (a) the projected surface area of the casting (measured at the die parting line) and (b) the pressure used to inject metal into the die. Most machines use toggle type mechanisms actuated by hydraulic cylinders (sometimes air pressure) to achieve locking. Others use direct acting hydraulic pressure. Safety interlock systems are used to prevent the die from opening during the casting cycles.
Die casting machines, large or small, very fundamentally only in the method used to inject molten metal into the die. These are classified and described as either hot or cold chamber die casting machines.

HOT CHAMBER MACHINES
Hot chamber machines (Fig.1) are used primarily for zinc, and low melting point alloys which do not readily attack and erode metal pots, cylinders and plungers. Advanced technology and development of new, higher temperature materials have extended the use of this equipment for magnesium alloy die casting.
Figure 1: Hot Chamber Machine. Diagram illustrates the plunger mechanism which is submerged in molten metal. Modern machines are hydraulically operated and equipped with automatic cycling controls and safety devices.
In the hot chamber machine, the injection mechanism is immersed in molten metal in a furnace attached to the machine. As the plunger is raised, a port opens allowing molten metal to fill the cylinder. As the plunger moves downward sealing the port, it forces molten metal through the gooseneck and nozzle into the die. After the metal has solidified, the plunger is withdrawn, the die opens, and the resulting casting is ejected.
Hot chamber machines are rapid in operation. Cycle times vary from less than one second for small components weighing less than one ounce to thirty seconds for a casting of several pounds. Dies are filled quickly (normally between five and forty milliseconds) and metal is injected at high pressures (1,500 to over 4,500 psi). Nevertheless, modern technology gives close control over these values, thus producing castings with fine detail, close tolerances and high strength.

Cold chamber machines (Fig. 2) differ from hot chamber machines primarily in one respect; the injection plunger and cylinder are not submerged in molten metal. The molten metal is poured into a “cold chamber” through a port or pouring slot by a hand or automatic ladle. A hydraulically operated plunger, advancing forward, seals the port forcing the metal into the locked die at high pressures. Injection pressures range from 3,000 to over 10,000 psi for both aluminum and magnesium alloys, and from 6,000 to over 15,000 psi for copper base alloys.

Figure 2: Cold Chamber Machine. Diagram illustrates die, cold chamber and horizontal ram or plunger (in charging position).
Die casting provides complex shapes within closer tolerances than many other mass production processes. In a cold chamber machine, more molten metal is poured into the chamber that is needed to fill the die cavity. This helps sustain sufficient pressure to pack the cavity solidly with casting alloy. Excess metal is ejected along with the casting and is part of the complete shot.
Operation of a “cold chamber” machine is a little slower than a “hot chamber” machine because of the ladling operation. A cold chamber machine is used for high melting point die casting alloys because plunger and cylinder assemblies are less subject to attack since they are not submerged in molten metal.
CASTING DIES AND THEIR CONSTRUCTION

The fixed die half of the die is designed to contain the sprue hole through which molten metal enters the die. The ejector half usually contains the runners (passageways) and gates (inlets) which route molten metal to the cavity (or cavities) of the die. The ejector half is also connected to an ejector box which houses the mechanism for ejecting the casting from the die. Ejection occurs when pins connected to the ejector plate move forward to force the casting from the cavity. This usually occurs as part of the opening stroke of the machine. Placement of ejector pins must be carefully arranged so force placed upon the casting during ejection will not cause deformation. Return pins attached to the ejector plate return this plate to its casting position as the die closes.
Fixed and moveable cores are often used in dies. If fixed, the core axis must be parallel to the direction of die casting mold opening. If moveable, they are often attached to core slides. Should the side of a die casting design require a depression, the die can be made with one or more slides to obtain the desired result without affecting ejection of the casting from the die cavity. All moveable slides and cores must be carefully fitted, and have the ability to be securely locked into position during the casting cycle. Otherwise, molten metal could be forced into their slideways causing a disruption of operations. Although slides and cores add to the complexity and cost of die construction, they make it possible to produce die castings in a wide variety of configurations, and usually more economically than any other metalworking process.
TYPES OF DIES

Dies are classified as: single cavity, multiple cavities, combination and unit dies (Figures 4-A to 4-D).

A single cavity die requires no explanation. Multiple cavity dies have several cavities which are all identical. If a die has cavities of different shapes, it’s called a combination or family die. A combination of die is used to produce several parts for an assembly. For simple parts, unit dies might be used to effect tooling and production economies. Several parts for an assembly, or for different customers, might be cast at the same time with unit dies. One or more unit dies are assembled in a common holder and connected by runners to a common opening or sprue hole. This permits simultaneous filling of all cavities.

Die casting component parts, decorative trim, and/or finished products offer many features, advantages and benefits to those who specify this manufacturing process.

Die casting is an efficient, economical process which, when used to its maximum potential, replaces assemblies of a variety of parts produced by various manufacturing processes at significant savings in cost and labour.
COMPARISONS WITH OTHER PRODUCTS

Compared with plastic injection molding Parts, die castings are the stronger, stiffer, more stable dimension, more heat resistant, and are far superior to plastics on a properties/cost basis. They help prevent radio frequency and electromagnetic emissions. For chrome plating, die castings are much superior to plastic. Die castings have a high degree of permanence under load when compared to plastics, are completely resistant to ultra-violet rays, weathering, and stress-cracking in the presence of various reagents. Manufacturing cycles for producing die castings are much faster than for plastic injection moldings. Plastics, however, may be cheaper on a unit volume basis, have colour inherent properties which tend to eliminate finishing, are temperature sensitive, and are good electrical insulators.

Compared with sand castings, die castings require much less machining; can be made with thinner walls; can have all or nearly all holes cored to size; can be held within much closer dimensional limits; are produced more rapidly in dies which make thousands of die castings without replacement; do not require new cores for each casting; are easily provided with inserts die cast in place; have smoother surfaces and involve much less labor cost per casting. Sand castings, on the other hand, can be made from ferrous metals and from many non-ferrous alloys not suitable for die casting. Shapes not producible by die casting are available in sand castings; maximum size can be greater; tooling cost is often less and small quantities can be produced more economically. you can check more sand aluminium casting

Compared with permanent mold castings, die castings can be made to closer dimensional limits and with thinner sections; holes can be cored; are produced at higher rates with less manual labour; have smoother surfaces and usually cost less per die casting. Permanent mold casting involves somewhat lower tooling costs; can be made with sand cores yielding shapes not available in die casting.
Forgings
Compared with forgings, die castings can be made more complex in shape and have shaped not forgeable; can have thinner sections; be held to closer dimensions and have coring not feasible in forgings. Forgings, however, are denser and stronger than die castings; have properties of wrought alloys; can be produced in ferrous and other metals and in sizes not suitable for die castings.
Stamping
Compared with stamping, one die casting can often replace several parts. Die castings frequently require fewer assembly operations; can be held within closer dimensional limits; can have almost any desired variation in section thickness; involve less waste in scrap; are producible in more complex shapes and can be made in shapes not producible in stamped forms. Stamping, on the other hand, have properties of wrought metals; can be made in steel and in alloys not suitable for die casting; in their simpler forms, are produced more rapidly; and may weigh less than die castings.
Screw machine products
Compared with screw machine products, die castings are often produced more rapidly; involve much less waste in scrap; can be made in shapes difficult or impossible to produce from the bar or tubular stock, and may require fewer operations. On the other hand, screw machine products can be made from steel and alloys which cannot be die cast; they have the properties of wrought metals, and they require less tooling expense.

Exploring the Manufacturing Process of A356 Aluminum Alloy Casting Gallery

Exploring the Manufacturing Process of A356 Aluminum Alloy Casting